Monsanto Continues to Deny That Weed Killer RoundUp is Deadly

There are currently some 18,500 pending cases in U.S. Courts against the Monsanto Corporation (a recently purchased subsidiary of Bayer). These cases have all been brought on behalf of persons claiming that exposure to Monsanto’s weed killer – RoundUp – caused them to develop various cancers, including non-Hodgkin’s Lymphoma, B-Cell Lymphoma and Leukemia.

To date, there have been several individual trials in those cases and in each instance, Bayer/Monsanto has lost in extreme fashion, with verdicts ranging from $80 million to $2 billion (recently reduced to $87 million). There are a half dozen or so trials scheduled for the upcoming months, including a case filed by a 12-year old boy who contends that exposure to RoundUp caused him to develop non-Hodgkin’s Lymphoma. 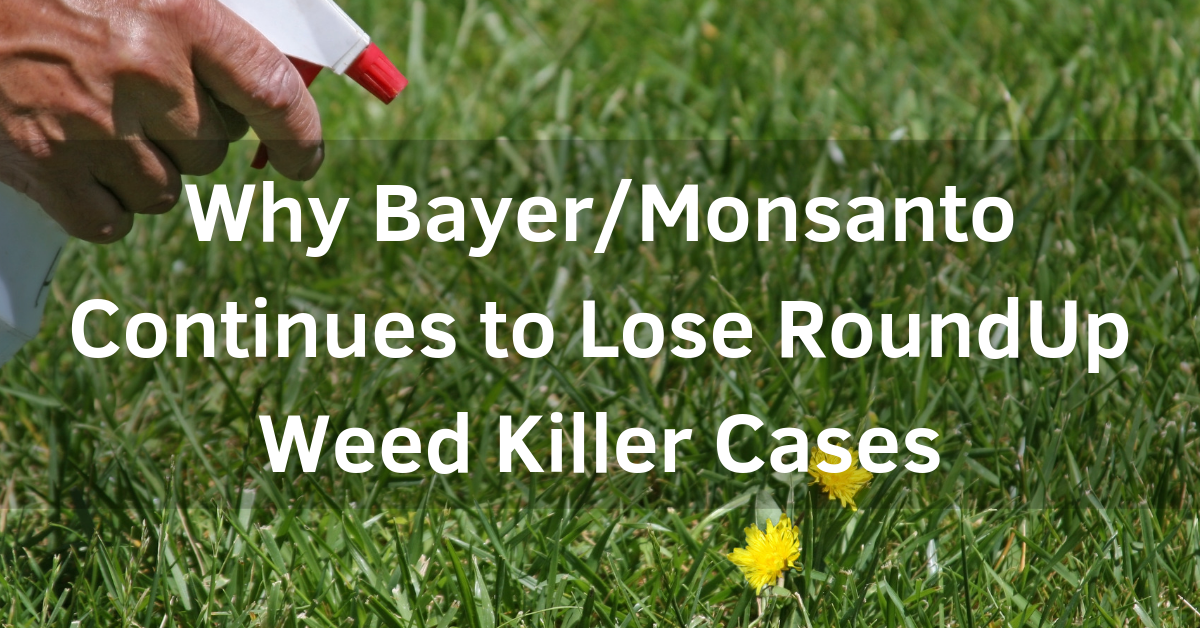 Why Does Bayer/Monsanto Continue To Lose These Cases?

Monsanto continues to claim in court that RoundUp is a safe product to use (they like to use the phrase “safe as table salt”), but when presented with the evidence, juries have not agreed. At trial, the juries have been presented with numerous studies going back several years or more which have concluded that there is a link between exposure to glyphosate (the primary active ingredient in RoundUp) and various cancers. The World Health Organization has labeled glyphosate as a carcinogen, as has the state of California and other jurisdictions. RoundUp has been BANNED in Austria and recent reports indicate that once its current clearance expires in 2022, it will be banned throughout the European Union.

Of particular concern to Bayer/Monsanto is that when evidence of their “bad behavior” regarding RoundUp has come to light – juries become angry. This bad behavior includes:

According to reports from the United States Geological Survey, there is some 250 million pounds of glysophate-containing weed killer placed on U.S. crops each year. A large portion of this is the RoundUp brand. To encourage the use of RoundUp, Bayer/Monsanto has developed genetically-modified grain seeds to make them “RoundUp Ready” so that the plants can be drenched with RoundUp without being killed.

What Will Bayer Do?

The billion dollar question is “what will Bayer do” in light of its Roundup situation? Since buying Monsanto in 2018 for $63 billion, Bayer has recently seen its stock values lose some $38 billion – a development that doesn’t make stock holders happy. Bayer recently announced that it was going to be spending $5.6 billion in research and development in the future to develop alternate weed killer formulas that don’t contain glyphosate. This is being done while at the same time Bayer continues to fight each case tooth and nail and continues to maintain that RoundUp is perfectly safe. It will be interesting to watch as this plays out.

Protect Your Rights Regarding RoundUp Exposure

If you or a loved one have been exposed to Round Up weed killer and developed certain cancers, including Non-Hodgkin Lymphoma, you or they may be entitled to compensation for these devastating conditions. For over 65 years, the attorneys at Lattof & Lattof, PC have been helping victims and families protect their rights and obtain fair compensation for suffering and injuries including those from defective products such as Round Up weed killer. We will work hard to obtain justice for you against those responsible. Contact us for a FREE CONSULTATION and we’ll be more than happy to discuss your case and advise you of your rights.