Do You Have A Case? Pradaxa Blood Thinner Medication Can Lead To Harmful Side Effects 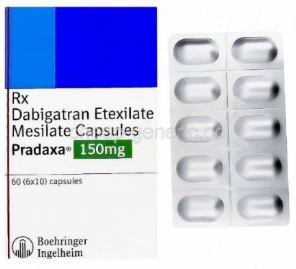 Pradaxa is a prescription blood thinner medication designed for patients at risk for health problems such as blood clots and strokes primarily in patients with atrial fibrillation (irregular heartbeat), those recovering from hip or knee replacement surgery, deep vein thrombosis and pulmonary embolism. Since it came on the market in 2010, Pradaxa has been prescribed to hundreds of thousands of people.

What Is the Problem With Pradaxa?

The danger with Pradaxa is that up until 2015, if a person on the drug experienced excessive bleeding, it was very difficult to stop or control the bleeding and this lead to serious medical problems, including over 1,000 deaths since 2010. The side effects of Pradaxa include:

Many patients suffering health problems arising from Pradaxa had no idea that the drug carried such a risk with it because the manufacturer (Boehringer Ingelheim) failed to properly warn doctors and patients of these risks while at the same time they were highly touting the benefits of the drug.

In 2014, the manufacturer of Pradaxa (Boehringer Ingelheim) agreed to pay $650 million to settle approximately 4,000 lawsuits filed by patients claiming to have been injured from the use of Pradaxa. Since that time several thousand more lawsuits are currently pending over the use of Pradaxa.

What If You Think You May Have a Problem From Pradaxa?

If you or a loved one suffered health or medical complications after taking Pradaxa, you or they may be entitled to financial compensation for medical bills, lost wages, emotional distress, pain, suffering and disability resulting from those complications. Call Lattof & Lattof today for a free Pradaxa consultation regarding your potential rights. Remember that claims of this type usually have a certain time limitation within which you may take action, so it is important that you make the call as soon as you can so as to preserve your rights.