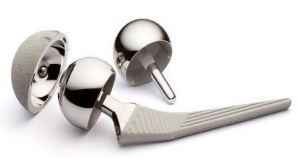 What Are Metal‐On‐Metal Hip Replacements?

Traditionally hip replacement devices contained a combination of metal, ceramic and/or plastic parts which
were surgically implanted so as to replace a patient’s hip joint in the event that injury, deterioration, infection or other conditions caused the natural joint to be damaged. More recently, a number of medical device manufacturers have begun using hip replacements that were almost entirely made of metal with the idea that these would last longer than devices containing plastic or ceramic parts. The list of these manufacturers includes DePuy Orthopaedics ( a subsidiary of Johnson & Johnson, Stryker, Zimmer, and others). Over 750,000 metal‐on‐metal hip replacements have been implanted in patients since the introduction of such products. Sadly, defective medical device injuries are becoming very common.

What Are the Problems With Metal‐On‐Metal Hip Replacements?

Properly designed and installed, metal‐on‐metal hip replacements should last 20+ years, however, many such devices fail in as little as 5 years. The problem is that the rubbing of metal on metal causes small bits of metal to fall off of the device into the joint and bloodstream. This can cause a number of serious health issues, including:

As a result of over 100,000 metal‐on‐metal hip replacements – already implanted in patients – have been RECALLED.

There are currently some 13,000 pending lawsuits filed by patients claiming to have been injured from the use of metal‐on‐metal hip replacements.

What If You Think You May Have a Problem From a Metal‐On‐Metal Hip Replacement?

If you or a loved one suffered health or medical complications from a metal‐on‐metal hip replacement, you or they may be entitled to financial compensation for medical bills, lost wages, emotional distress, pain, suffering and disability resulting from those complications. Call Lattof & Lattof today for a free consultation regarding your potential rights. Remember that claims of this type usually have a certain time limitation within which you may take action, so it is important that you make the call as soon as you can so as to preserve your rights.