Head-on Collisions and Their Consequences

All car accidents are scary, but a head-on collision can be especially traumatic. The split-second realization that it can’t be avoided, the direct crash, and the pain of impact can cause long-lasting physical and emotional injuries. In 2017, there were more than 82,000 head-on collisions across the U.S. that resulted in death or injury. 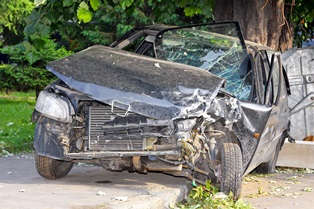 While most accidents are caused by driver error, there are a variety of factors that contribute to a head-on collision. Some of the most common causes include:

Serious Injuries Can Result From a Head-on Collision

In any car crash, the force of the impact can cause irreparable damage to a vehicle and seriously injure those inside, and this is especially true for head-on collisions. The vehicles collide in such a direct manner, there is no way to mitigate the impact. While those involved in a sideswipe accident, for example, may be able to avoid some of the force of the crash, the forces of both cars act directly upon one another in a head-on collision. Some of the most common injuries in these accidents include:

What to Do After a Head-on Collision

If you or someone you love suffered injuries in a head-on collision, it’s important to seek medical help as soon as possible. In some cases, injuries may not be apparent, or the extent of your injuries may be unknown. Only a medical professional can assess your situation and ensure that the appropriate measures are taken to safeguard your health.

Additionally, it’s important to retain as much information as possible about the accident and the scene. Call the police to file an official report, take photos of the scene and vehicles involved, and speak to witnesses and retain their information.

The rules about fault are extremely strict, so it’s best to have as much information as possible to hold the at-fault party accountable. While legal action cannot undo the pain and damage that has been done, it can force the driver responsible for your injuries to cover any costs associated with the crash. This can include compensation for:

At Lattof & Lattof, PC, our dedicated lawyers have helped head-on collision victims and their families understand their rights and obtain the compensation they needed to recover as fully as possible. Our legal team understands what a difficult time this can be, and we work hard to provide compassionate, effective legal representation, so our clients can focus on what really matters—their recovery and return to normal life.

Get in touch with our team today. Call our Mobile office, or take a moment to fill out the contact form on this page. We can answer your questions and help you decide how best to move forward.