A 2016 study by AAA found that approximately 80 percent of drivers experienced some level of anger or aggression while driving over the course of the last year. They may have felt angry if a driver in the left lane would not move over or someone was driving too slowly. The same study found:

It’s unsafe and illegal to operate a vehicle aggressively, and if you’re injured in an accident with an angry driver, you may be owed compensation. 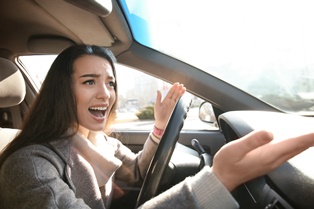 Aggressive behavior is any type of deliberate action taken by one driver with some type of ill intention for another driver that disregards the safety of all drivers. Some examples of road rage and aggressive driving include:

If you see another driver operating his vehicle this way, don’t engage with him or react. Do your best to stay out of that driver’s way. If you are in an accident with an aggressive driver, gather any information you can about the incident.

How to Spot Someone Driving Aggressively

It’s not always easy to spot aggressive drivers because they may be several cars behind you. However, there are signs that a driver is experiencing road rage or aggression when you see the driver:

Road rage is much like aggressive driving but tends to take things one step further. The driver may:

Alabama’s Anti-Road Rage Act went into effect in 2019. One component of the Act states that drivers in the left lane may only stay in that lane for one and a half miles before they must merge back to the right. The goal of the Act is to help prevent situations where drivers engage in aggressive or road rage behavior.

Those who fail to follow the law will face a ticket with a fine of $200; however, the Act has some exemptions. These include when there is heavy traffic, road construction, or poor weather conditions.

How This Act Impacts Your Car Accident Case

If you’re in a car accident with a driver that hits you in the left lane, it will be important to document the incident carefully. For example, if you are traveling in the left lane for numerous miles, beyond what this new Act allows for, this can impact your ability to file a claim for compensation. It’s very important to work closely with an attorney to ensure you never file a claim with wording that could suggest your own negligence.

Why You Need a Lawyer

Hiring an attorney for your aggressive driving case ensures you have all of the information you need to obtain the compensation you deserve. Don’t wait for an insurance company to approve your claim. Allow our team at Lattof & Lattof, PC to help you. Schedule a free consultation to discuss your case.